What is a Foundation Quarter Horse

Home/What is a Foundation Quarter Horse

What is a Foundation Quarter Horse ?

“As far as trying to define exactly what constitutes a “Foundation Quarter Horse” is concerned, it’s not that hard; at least not as far as technical terms are concerned.”

When you think about it, either of these two definitions could fit the bill. There is, after all, no doubt that horses like King, Joe Hancock, Driftwood, Poco Bueno and others of their kind did serve as the foundation – or base – upon which the breed we now know as the American Quarter Horse was built.

But trying to define something like the Foundation Quarter Horse in technical terms does present something of a problem; because the fact of the matter is that the nomenclature is less of a “term,” and more of a “tale.”

Put another way, the Foundation Quarter Horse is a story – steeped in history, rich in lore and populated by colorful characters.

It is the tale of King and Byrne James in pursuit of a speedy calf at a rodeo in South Texas; the story of Leo flying down a Pawhuska, Oklahoma, straightaway; and the account of Blue Valentine and Hyde Merritt tripping a steer at the Cheyenne Frontier Days.

It is a saga that conjures up images of such great man and beast teams as Jess Hankins and King, Bud Warren and Leo, E. Paul Waggoner and Poco Bueno, Howard Pitzer and Two Eyed Jack, and Duane Walker and Jackie Bee – Hall of Fame Horsemen and Horses, each and every one.

He carried starry-eyed settlers and homesteaders in pursuit of their dreams; and steely-eyed cattlemen in search of their grassy empires. He chased fast cash on furrowed racetracks, and fast calves in dusty rodeo arenas. He pushed fat steers up the Chisholm Trail, and even pulled “two-row listers” over newly-cultivated fields.

He was, as one legendary pioneer horsewoman so aptly put it, “a willing work partner throughout the week, and our greatest source of pride during the week-end.”

He is the Foundation Quarter Horse. ~  FRANK HOLMES 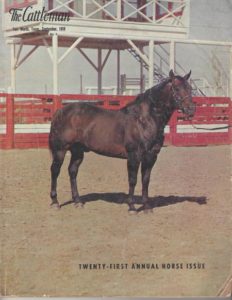